A Walk Around the Ancient Vale of Lanherne 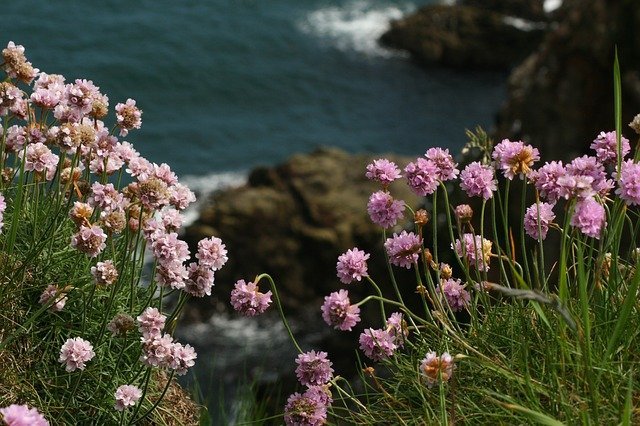 There aren’t any motorways in Cornwall – just one road (the A30) which is effectively the only way to get in or out of the county.

Every August, up to a hundred thousand visitors flock to our laid-back coastal village. Snaking through the fume-choked bottle neck, they descend on the town like a drone of bees in search of honey, quadrupling the number of inhabitants overnight. The energy of the entire county is transformed as folks, looking to escape the thrum of the city, wend their way “Down South” to join the parade of fellow holiday-makers who are hoping to do the same.

Every Summer I think I’m prepared for this energetic shift, and every Summer I’m caught out.

Thankfully, years of taking the shoelace express over local hills and dales have allowed me to build up a mental map of undiscovered hollow-ways and shady woodland paths that offer a welcome respite from the chaos of the crowds.

This bank holiday weekend was spent meandering through the Vale of Lanherne with a small group of local nature aficionados, who were also of a mind to stop the world and get off. I’ve walked this section of the old Celtic Saint’s Way many times, and can count on one hand the number of souls I’ve ever encountered on the three mile route. The only sound to be heard is the soft cooing of wood pigeons, and the gentle whisper of the wind as it brushes through the leaves of the mighty oaks. It really is one of my favourite places to rejuvenate.

Our meeting point was the ancient stone lantern in the churchyard at St. Mawgan. This unusual sculpture depicts the sanctuary lantern, which is still kept alight in the neighbouring 800-year-old cloistered convent. This would have been a welcome sight for pilgrims of old after many miles of travelling on foot. 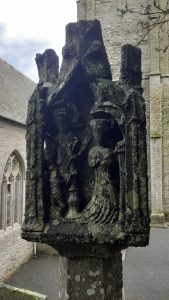 Unfortunately the recent heatwave (and the fact the council chose this particular week to cut back the hedgerows,) meant that many of the wild medicinal plants we’d usually spot at this time of year were dry, shrivelled up and well past their best. However, as the route is lined with ancient woodland, we were able to honour three of the trees venerated in the mysterious Celtic Ogham. 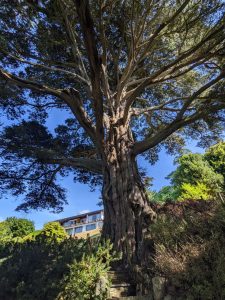 The age of this stunning specimen can only be guessed at. I’ve taken many pictures of this particular yew tree and none do it justice. There’s something pretty magical about standing under it’s ancient branches and imagining its creaks and groans are the tree spirit saying hello.

The majestic yew tree can live for over 2000 years. As such, it’s often found depicted as a way-marker on old maps.

The yew tree is associated with life and death; Life because of its extreme longevity, (and the fact it can re-root itself by dipping its branches low to the ground,) and death, because of its poisonous nature and dark imposing stature. It’s commonly found in churchyards, (in fact over 80% of all the yew trees in the UK are located within the vicinity of a church.)

Yew wood is extremely pliable – the perfect material for making medieval English longbows. Legend has it that the yew tree provided the wood for Robin Hood’s own bow, and that both he and Maid Marian were betrothed under the branches of a large (and still living) yew tree in the churchyard at Doveridge.

In the last few years campaigners have rightfully made the case to protect these ancient trees from damage. Thankfully new legislation now recognises the importance of these wonders of nature, and has set out laws to protect our cultural heritage. 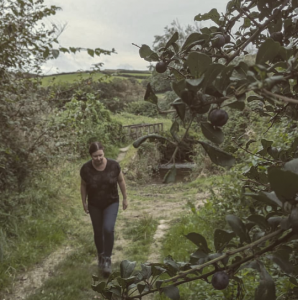 The blackthorn tree in the foreground is my traditional gathering spot for sloe berries, which I harvest around this time of year for my annual batch of sloe gin.

In Celtic mythology, the mysterious blackthorn tree was considered to be home to the fairies. Anyone carrying a walking stick made from blackthorn wood was suspected of being a witch.

The number of sloes on a blackthorn bush is very much linked to the weather during the previous Spring and Summer. Too dry, and the sloes will be small and shrivelled. Too wet and cold and they won’t develop at all. A good crop needs the perfect balance of both sunshine and rain, so it will be interesting to see how the berries do next year after these last few months of drought.

Sloes are in the same family as plums and cherries. If you’ve ever been brave enough to eat one raw, you’ll know they’re incredibly sharp and will dry out your mouth before you finish your first bite!

The flowers, fruits and leaves of the hawthorn contain antioxidant compounds used to treat a variety of heart conditions. It’s an invaluable herb in my dispensary, not only for strengthening the heart muscle and supporting people with high blood pressure, but also to help heal emotional wounds. I simply couldn’t do without it.

A feared plant in folklore, hawthorn is often associated with bad luck. Perhaps this is because of the smell of the flowers which have been compared to that of rotting flesh. Today we know that hawthorn flowers contain trimethylamine, a substance that occurs in decaying animal tissue. In times past, the flowers were considered a bad omen, and never allowed in the house.

The superstitious belief in the wide-ranging protective powers of hawthorn made it a popular choice for hedges. It was used to protect a land’s boundaries and keep evil influences away from the home.

As hawthorn trees are often laden with berries in late Autumn when other native fruits have faded, they’re a popular choice for hawthorn preserves. If you’re a fan of wild foods, I encourage you to check out the fabulous recipes on my dear friend Monica Wilde’s Substack who recently spent an entire year living only on wild food she could either forage or barter.

If you’re a keen walker and would like to join us on future walks, please do sign up for the newsletter (as our events are very small, this is where I list the dates first,) or keep an eye on the herb shop for up coming dates.