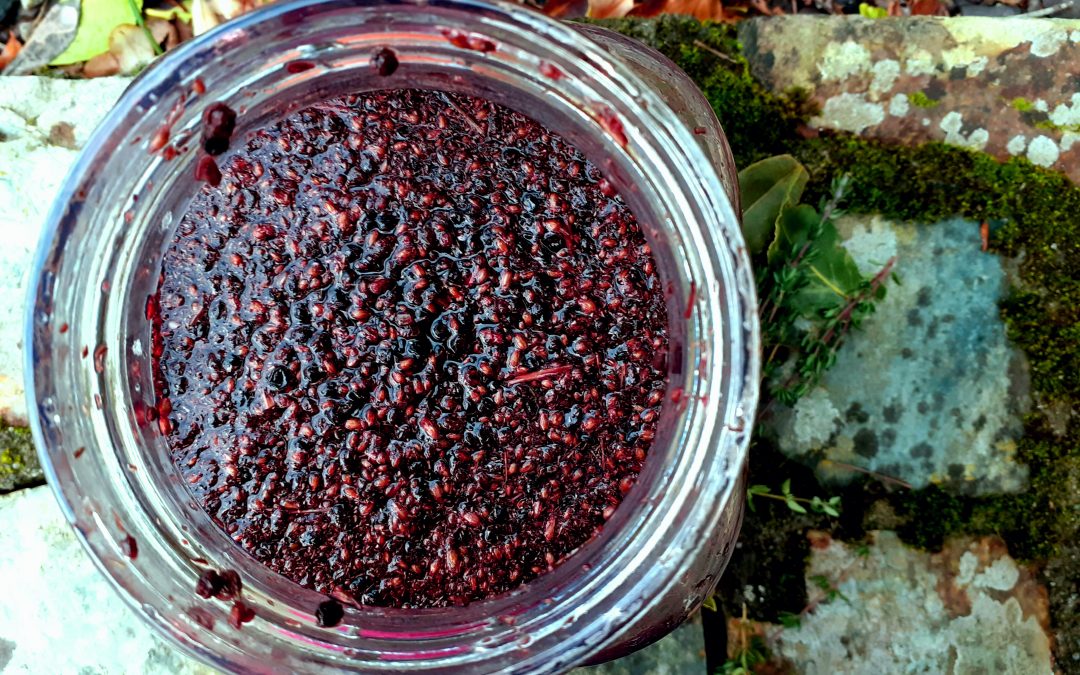 Vinegar is among the oldest foods and medicines known to humans, and is believed to have been in use for some ten thousand years. Before refrigeration, vinegar was used to preserve and flavour food, as a medicine, and as a base ingredient for cosmetics. The word itself is supposedly derived from the french “vin-aigre” meaning “wine gone sour.” Because it was easy to transport, it was reputedly drunk by roman soldiers, and is believed to have helped them survive their long marches and arduous battles. However, drinking vinegar is far from a new trend. It’s history can be traced back to the 18th Century, when it was a popular beverage, commonly known as a herbal switchel or shrub.

Today, many people drink apple cider vinegar for it’s health giving properties, but it’s popularity as a refreshing beverage goes way back. In the American colonies, switchel was a favourite tipple of thirsty farmers who often drank it while harvesting hay. This gave rise to the nickname “Hay-maker’s Punch”. Switchel (also known as shrub) is basically a vinegar drink combined with fruit juice and sweetened with honey, brown sugar or maple syrup. The addition of botanicals also made it popular among herbalists, who used the combined properties of herbs, vinegar and honey to make effective, tasty and affordable remedies for a variety of common ailments.

In recent years there’s been a revival of interest in vinegar based drinks, both by bartenders and herbalists, who use a variety of seasonal ingredients to make refreshing, healthy concoctions. Switchels make an excellent base for mocktails, and modern herbalists are rediscovering the delights of making shrubs as they offer a suitable alternative to tinctures for people abstaining from alcohol. Vinegar based medicines are also great for children who (mostly) like the taste.

The medicinal properties of vinegar are well documented. Herbalists use it to extract the active components of plants as it has a number of benefits.

Vinegar by itself has a number of healing properties:

Historians have documented that during the plague, people held vinegar sponges to their noses to help ward off illness. These sponges were carried in small compartments in the tops of walking canes, and were known as “vinaigrettes.” Vinegar was an accepted treatment for wounds, and employed widely in field hospitals during World War I. The power of vinegar to ward off illness is legendary.

One of the most famous stories about the potent powers of vinegar, comes from medieval France, where the black death wiped out almost 60 percent of the population. The story goes that four robbers were able to steal from the dead and dying without succumbing to the disease by dousing themselves with a mixture of vinegar and herbs which included garlic, cloves, sage, rosemary, rue and lavender. The following vinegar recipe hung in the Museum of Paris, is said to have been an original copy of the recipe posted on the walls of Marseilles during an episode of the plague.

Take three pints of strong white wine vinegar, add a handful of each of wormwood, meadow-sweet, wild marjoram and sage, fifty cloves, two ounces of campanula roots, two ounces of angelic, rosemary and horehound and three large measures of camphor. Place the mixture in a container for fifteen days, strain, express and then bottle. Rub on the hands, ears and temples when approaching a plague victim.

There are many modern variations of the four thieves vinegar recipe. Most typically include herbs such as sage, lavender, thyme, garlic, rue, mint and wormwood. It’s traditional to use four herbs in the recipe – one for each thief!

Which vinegar is best?

As with wine, there are literally hundreds of vinegar varieties to choose from. Both taste and medicinal value should be taken into consideration when constructing your vinegar recipes.

The following suggestions are a good place to start if you want to experiment making your own herbal vinegars for everyday use.

Apple cider vinegar has many uses, and is the most versatile of the vinegars when it comes to making herbal preparations for medicinal use. Herbalists often combine cider vinegar with honey to make what is known as an oxymel. This comes from the Greek meaning “sharp and sweet.”

When buying apple cider vinegar for medicine making purposes, always look for unfiltered vinegar made from whole organic apples that have been cold pressed and fermented in wooden barrels and aged for at least six months. Many good quality apple cider vinegars come with the Mother. Cheaper varieties made from apple cores and peel are quickly processed and don’t have the same kind of medicinal properties.

Although many books recommend using fresh herbs, I prefer to use dried herbs when making my vinegars. This avoids any water being introduced into the product, and reduces the risk of contamination. The length of time you leave the herbs to steep is a purely a matter of taste. For some people, a week is long enough, personally I’ve found that about three weeks yields the best results. If you’re one of those people who loves a really intense flavour, then go for a “double maceration.” Wait about two weeks before straining your vinegar, then add fresh plant material and steep again. Do keep checking for flavour so you don’t ruin all your hard efforts by creating an overly pungent brew. Store bottles out of direct sunlight and at room temperature and shake the contents sporadically. Always make sure that your plant material is covered by vinegar so it doesn’t go mouldy.

Once you’re happy with your vinegar, strain off the liquid using a clean muslin cloth, jam strainer or jelly bag and repeat until you have a clear liquid. You can then use a funnel to pour your product into clean bottles, which then need to be sealed tightly. A small word of warning; it’s a good idea to store fruit based vinegars in bottles with a swing top lid that can be opened sporadically. This is because bottles have been known to explode if gas is allowed to build up inside.

How to safely bottle and store herbal vinegars.

When used for preserving, vinegar must have an acidity of at least 5%. Anything less should not be used for canning.
Make sure that all your equipment is sterilized before use. Wash all utensils with hot soapy water using a bottle brush if necessary. Rinse, and leave to stand in a sterilizing solution for the required amount of time. Next, dry the bottles in a hot oven for 15 minutes to ensure the containers are completely free of bacteria. If you don’t have any sterilizing fluid to hand, you can stand your bottles upright in a pan with an inch of boiling water at the bottom, and leave in a preheated oven for 350 degrees for 15 minutes. Only use glass, ceramic or plastic containers for storage. Metal vessels and pouring accessories can react with the vinegar and cause it to go bad.
Always label and date your bottles (before and after you open them.) Most vinegars will last between 3 and 6 months if stored properly. 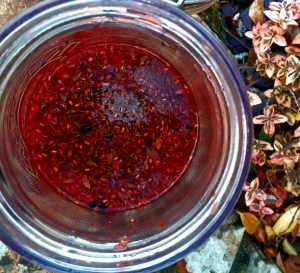 Mash the fresh raspberries to a pulp and spoon into a clean, sterilized mason jar. Cover the fruit with the honey and mix well. Top up with apple cider vinegar, and add the sprigs of thyme.

Shake well, and store for two weeks before decanting into glass bottles. Simply add sparkling water and a squeeze of lime for a delicious mocktail, or add to gin and top up with tonic.

Safety note: Due to the honey content, this medicine is not suitable for infants under the age of 2. Neither is it suitable for pregnant or nursing mothers.

Want to learn more about herbal vinegars and botanical drinks?

Click here to book a spot on my next botanical drinks workshop.